The storms with names had passed, the morning began with a clear sky and the volunteers gathered around the Tallaght boulder at Rua Red for the first short walk of the Rock to the Top project, on Sunday 22 October.

Inspired by Oisín i dTír na n-Óg, who lifted a boulder up the mountains near Tallaght, the group took up the challenge to do the impossible and recreate his mythic feat by helping in the year-long effort to bring the boulder up to the mountains by hand!

Laden with rock and sandwiches they headed for the hills, and came across Sally and her dog waiting for them in Sean Walshe Park. They reached the Bohernabreena Reservoir car park in record time. Dublin Mountains Ranger John was waiting there, with more families to help carry the rocks the rest of the way. The sounds of the city were replaced with the wind in the trees and running bursts of children’s feet.

John with Rangers Samantha and Michael introduced us to the trees along the route, and told us about the return of the native red squirrel nearby. The rocks were deposited, to be brought the rest of the way to the top on 12 November, to add to the Rock to the Top cairn.

As the group approached the picnic spot, the air resounded to the resonant close harmonies of a trio singing Georgian mountain folk songs by the upper lake (led by Fiona Dowling, another IN CONTEXT 4 commissioned artist). Their song for better weather chased away the few spits of rain which had started. The group of 35 sat by the lake to listen over lunch and a taste of honey, from Jones farm and Olly’s farm on either side of the valley of Glenasmole. The singers moved far away up the other side of the lake, and those with sharp ears could hear an eerie echo of their singing from the mountains.

On the return journey the last of the Autumn’s blackberries provided nutritious diversion. A band of boys with sticks sang a song together and watched a grey horse gallop in a field.

There is plenty of rock to carry, so everyone is invited to join the Bring the Family Rock Hauling Walk (Part 2) on Sunday 12 November at noon from Bohernabreen Reservoir car park. You can help bring the rocks all the way to the cairn on the mountain, or join in for as long as you can.

Check www.incontext4.ie for details of walks as they are announced, or email rocktothetopdublinmountains@gmail.com to register your interest and receive updates. 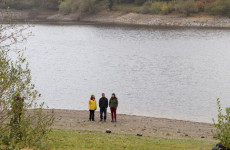 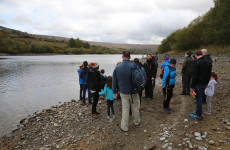