On Sunday 12 November participants gathered this time at Bohernabreena, for the second leg of the Bring the Family walk, the first of which was on Sunday 22 October. Ciarán and Ranger Tom arrived on foot from Tallaght bearing more rock supplies from the boulder outside Rua Red. The winter sun was breaking through and a fresh north wind was blowing.

The group, which included some who had been out last on the June Rock to the Top walk, collected the rocks left in October and made their way to the upper valley. The larch trees had turned a golden brown since we were last through. Many more leaves had fallen, opening new views of water. Light and shadow played through the trees, and danced across the mountains with the fast passing clouds. The upper reaches had taken on a winter cloak of deep colours as the last summer’s green faded. A bumper crop of red berries drew out attention to the holly trees in the hills. Ranger John says it’s a sign of a harsh winter to come. We’ll find out soon, as we continue the quest to shift the boulder from the city.

The cairn grew substantially from the load delivered. Some relics of the Fianna appeared from under a rock and brought to mind a story which Ciarán retold on the windswept plateau. It was the very spot where three hundred year-old Oisín came back to prove the truth of his stories to St Patrick. It is where he summoned up a fierce mythic hunt by blowing on the Dord Fiann.

We had lunch in a hollow overlooking the valley. Then the conversations continued as we made for the shelter of the valley, and the sun sank behind us. A brief visit from Oisín’s white horse delighted the stragglers.

The Samhain Dusk to Dark Walk on Saturday 25 November will mark the shortening days and will require torches and high visibility wear.

On Saturday 16 December there will be a daytime Stop Shopping and Head for the Hills Hike.

Check www.incontext4.ie for details of walks, or email rocktothetopdublinmountains@gmail.com to register your interest and receive updates. 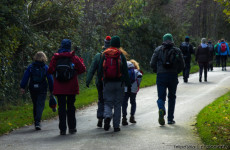 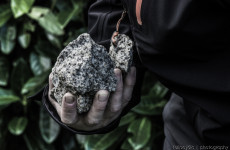 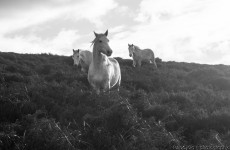