On Sunday 21 January, for a second day, showers of rain were sweeping in across the mountains to Tallaght. A small determined band of walkers (all first-timers) gathered at the boulder outside Rua Red. The forecast was for a clear afternoon, but some who had intentions couldn’t be enticed out into the rain.

A red bus pulled up in the midst of a squall, with seventeen reinforcements from An Óige. They loaded up with rock and posed for a shot for the local paper. A handful went with the bus to Bohernabreena. The rest headed off through a waterlogged Seán Moore Park to hit the mountains. The Dodder roared when we reached Kiltipper. Dark clouds poured down from Glenasmole.

At Bohernabreena Reservoirs Car Park a second group gathered to join the walk. They loaded up their rocks, lightening the load for other walkers. The entire group, now swollen to thirty six set out on their quest. The reservoirs were high and the clouds stayed low. Rain returned. Waterproofs and walking boots started to leak. Water gushing around the bends in the brown water canal to the side of the reservoir made patterns of fixed waves where flow met counterflow.

Pausing for lunch at Reservoir house, we huddled close to the eaves. Poet Ian Kilroy emerged from the group to read from his collection of 108 poems, Three Rock Sonnets inspired by the Dublin Mountains. He introduced and read No. 37 'Where the City ends...'; No. 9 'Fresh face to the mountain...'; No. 34 'The mountain is unknowable...'.

At Castlekelly crowds of hens, ducks, and geese splashed colour on a grey day. Where the Dodder bends to meet Maureen’s Brook the roar came from two sides as the torrents merged. Water flowed down the laneway as we reached the open mountain. Since last month’s walk, winter’s deep red-brown of dead fern and purples in the trees were made richer by the rains. Bent against a head wind and the rain, we drifted into a long trail of walkers, each finding the measure of the hill. Each following, each fighting their way with their load to the Top. Some spotted three white horses down the hill.

At the Top the walkers added their stones to the cairn. It was January. They had dropped a stone as promised. Some drank tea, backs to the howling sodden gale. One passed around mint humbugs. Taking time for the ceremonies we made the place our own for a while. The elements drove us to the valley. With a load lost and wind at our backs the descent was easier. The horses came to us at the gate. We danced around each other to leave them on their side, because we could not take them with us.

At a break in the rain we gathered under a tree. Biscuits were passed around and Ian gave us two poems - No. 39  'Leaves bow under heavy raindrops...' and No. 7 'In the city below the mountain people run from the slanting rain...'.

A lone deer was sighted by the brown water canal. His white rump then bounded into the forest.

Thanks to Ian Kilroy, the Dublin Mountains Partnership Volunteer Rangers, Marie at An Óige, and leaders Ann and Martin for their help on Sunday 21 January.

Email rocktothetopdublinmountains@gmail.com to register your interest and receive updates. Check www.incontext4.ie/news for details of walks. 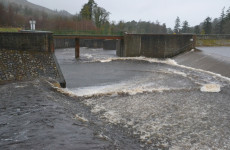 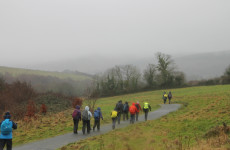 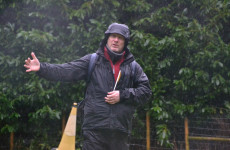 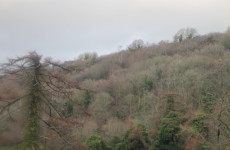