The day was filled with promise as walkers gathered at Rua Red for the day when the last of the Rock would at last arrive at the Top.

The Rithim Orchestra of young traditional musicians created a festive atmosphere, and played from their newly composed suite of the Celtic seasonal festivals. Tim Doyle introduced and conducted them in Lúnasa and Imbolg. He spoke of the bonfires spreading from the centre of Ireland on these occasions. We would light our own fire today in the hills. Walkers handed over food for the communal picnic, then packed the last of the rocks from the crate for the final ascent.

As usual now, the group swelled considerably at the reservoir gates. The water in the lakes was low. The spillways were dry, and we remembered the torrents of January. Green had spread up the hills as the ferns bloomed again in the higher reaches. A gaggle of downy goslings scurried ahead along the road as we passed the farms. The sun came through strong and bright as we reached the open hill. The walk to the top was harder for the heat. We remembered the wind of September, the clouds of October, the frost of November, the rain of January, the flash blizzard of February, the snows of March, the mist of April, and the hot day last June when the challenge began.

Over fifty walkers made it to the Cairn. It now sits among the great ancient cairns of the surrounding summits. Hundreds have joined together to make this journey, linking city to mountains across the cycle of seasons. The seasons will keep turning and many more will make the journey to look back down the valley of Glenasmole to the city below.

Music greeted the walkers as they arrived in the wooded glade down the hill. The Rithim players had come to the hill and were having a session. Lamb from Jones’ farm next door was cooking on the bbq, along with some venison burgers from the local deer. A table was laden with food brought to share: home bakes, salad from the garden and honey from the hives placed across the field. When the feast was finished and the last of the strawberries were gone, the entertainment began.

Local people came to join the celebration and we sat on bales of local straw, blankets and the grass. The mythical story of Oisín in Glenasmole was recreated once more by Aisteoirí Thamhlachta from Tallaght based Gaelphobal Thamhlachta. We remembered how they first performed in this field in the snows of March. Young Oisín and Niamh Chinn Óir circled the firepit as three hundred years of the story slipped by. Old Oisín took the path out of the forest with the aid of St Patrick and a zimmer frame. We heard two more movements from the Rithim Suite. The orchestra played in the shade of the glade evoking Lúnasa and Bealtaine and the hope of a new summer to follow this one. Walkers made the descent to Tallaght and the valley talking along the way.

Thanks to all the walkers who have joined the challenge throughout the year to get the Rock back to the mountain. Thanks also to John Lee of Glenasmole Community Centre, Lisa Murphy, Dublin Mountain Partnership Rangers for their dedication throughout the year, and a very special thanks to Donie Anderson, of Glenasmole who has helped immeasurably from the start of the project. His enthusiasm and love of the valley and desire to share and pass on its natural treasures has been inspirational.

An exhibition of photos from a year of Rock to the Top is planned for Rua Red Tallaght in the Autumn. Come and see. 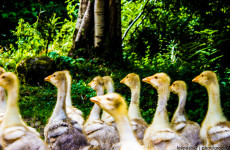 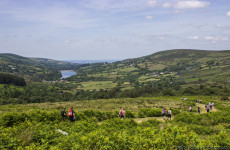 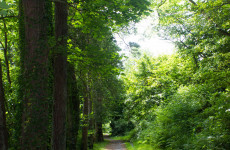 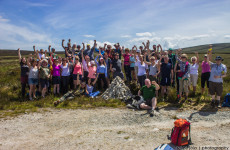 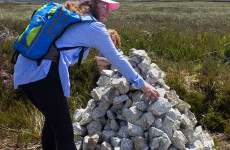 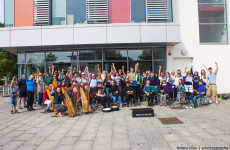 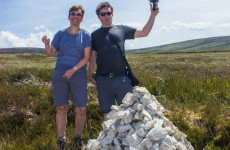 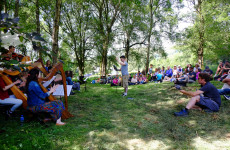 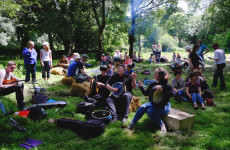 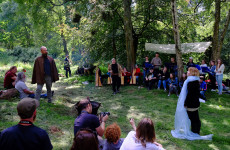 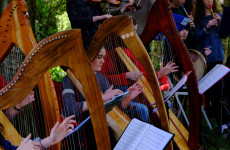 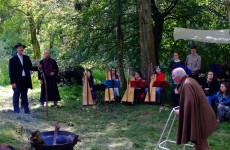 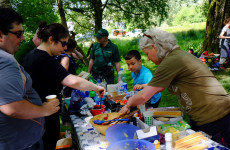 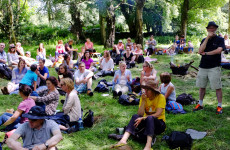 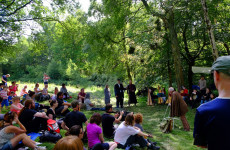