After a long winter the walkers came to embrace the Summer. A bright day welcomed us at Rua Red Tallaght. We loaded our rocks. There is one crate left. We headed along the Dublin Mountain Way through Sean Walsh Park. The mountains were bright in the distance, under bright sun and fluffy clouds.

At the reservoir car park we were joined by others, including some surprise return walkers. Chris Moriarity author of Down by the Dodder gave us an introduction to the planted trees of the landscaped reservoirs. Along the way fresh leaves were bursting out everywhere, greening the valley.

At the upper lake Dr. Chris brought us through the geological history of the valley. The land originally shifted from Africa. The granite was formed by slow-cooling magma. The limestone was formed in a primordial sea, and then deposited during the ice ages. The granite of the upper valley supports the heather which attracted the Red Deer which Oisín, Fionn and the Fianna hunted. The limestone base supports the grass which feeds the sheep.

At the hollow near the lone tree we stopped for lunch looking back on the lakes and the plain below. We were joined by farmer Donie Anderson and Andrea Webb (National Park Ranger) before making for the top.

The sun smiled on our descent, with some refreshing drops through the rays from the rapidly passing clouds.

Join in and be part of building the Cairn! 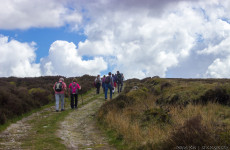 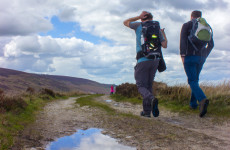 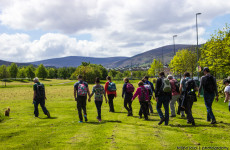 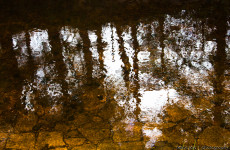